The second edition of the Amsterdam Light Festival, centered on the theme Building with Light will take place from 6 December 2013 to 19 January 2014. It will feature a unique selection of 30 light sculptures and illuminated artworks by international contemporary artists, which can be seen along the canals and streets of central Amsterdam. 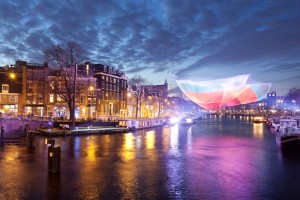 Water Colors, the boat cruise, will take visitors on a journey through the canals of Amsterdam and the Amstel river to experience breathtaking light art, illuminated buildings and bridges.

The Illuminade is an evening walk through the Plantage area, among spectacular projections on historical buildings, inspiring installations on the street and in public parks. It will be open from 12 December 2013 to 5 January 2013 between 17:00 and 22:00.

On Saturday 14 December, stores in the center of Amsterdam, including De Bijenkorf, V&D, H&M and Magna Plaza, will stay open until 22:00 for the ‘Amsterdam Light Shopping Night’.

WestCord Art Hotel, Foam, Hermitage, NEMO, and a number of galleries will host special exhibitions, while the Rijksmeseum will organize an interactive Light Battle for visitors to participate in and compete with each other.

Several companies will organize their own light art in the city. Many other special events and concerts will take place at various locations.

“The partnerships have been organized to promote tourism in Amsterdam in the darkest and coldest months of the year. Together with our partners, we offer an attractive and surprising program for both our international and national visitors,” says Raymond Borsboom, director of Amsterdam Light Festival.