Amsterdam’s trash – strike in the city 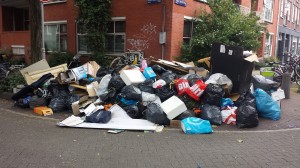 Amsterdam city entering its second day of garbage collectors strike and garbage is piling up on the streets.

The fact that something like that can happen in the 21st century is still beyond our understanding.

Public servants should never be allowed to strike. The workplace does not belong to them but to the tax payers, be it in a municipal or country.

The tax payers are actual the shareholders of the cities and country and when the civil servants strike they do not only punish the citizens they actually punish their shareholders.

The cynical act of striking on garbage collection, trying to push the citizens to influence the negotiation and cry for stop of strike is a very dirty act. Therefore, and since there is a court for these types of conflicts, we call our comrades to forbid public servants in all level from being able to strike.

We do not think that someone who can leave all this trash on the street should ever be entitled for a salary rise.