The sixth edition of KLIK! returns to the EYE Filmmuseum from 12 to 17 November 2013 with high-quality short animations, as well as feature-length films and documentaries from all over the world. 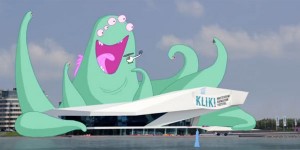 The big theme of KLIK! 2013 is The Fabulous Fifties. The 1950s that inspired this year’s festival were a truly groundbreaking era in animation, laying the groundwork for the animation movement now known as ‘Cartoon Modern’.