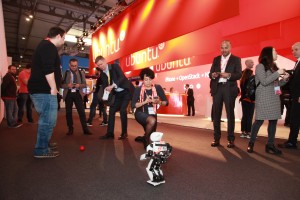 The popular conference is organized by GSMA that represents the interests of mobile operators worldwide, uniting nearly 800 operators with more than 250 companies in the broader mobile ecosystem, including handset and device makers, software companies, equipment providers and internet companies, as well as organizations in adjacent industry sectors. The GSMA also produces industry-leading events such as Mobile World Congress, Mobile World Congress Shanghai and the Mobile 360 Series conferences.

GSMA Intelligence Forecasts 72% Global Unique Subscriber Penetration by 2020
Almost three-quarters of the world’s population will be connected to a mobile network by 2020, according to the latest study from GSMA Intelligence, the research arm of the GSMA. The new study indicates that an additional one billion people will become mobile subscribers over the next five years, bringing the total to 5.6 billion – equivalent to 72 per cent of the expected global population by this point. However, unique subscriber growth is expected to slow over this period compared to previous years as many markets approach saturation point, highlighting the need for mobile operators to unlock new growth opportunities in areas such as 5G, M2M and the Internet of Things.
“Over the next five years a further one billion people will take advantage of the social and economic opportunities made possible by mobile connectivity, but we are now entering a new era that presents mobile operators with fresh opportunities and challenges,” said Hyunmi Yang, Chief Strategy Officer at the GSMA. “We are already seeing operators in highly penetrated developed markets seeking to offset slowing unique subscriber growth by evolving and broadening business models and investing in new network technologies, services and digital ecosystems. As new services continue to develop on mobile platforms, operators worldwide must ensure that they capitalise on the opportunities presented by the vast and growing ecosystem that nearly universal global mobile connectivity has created.”
Slowing Subscriber Growth and New Connectivity Opportunities
GSMA Intelligence calculates that there were 4.7 billion unique mobile subscribers worldwide at the end of 2015, equivalent to 63 per cent of the global population. The industry has benefited from rapid subscriber growth over the last five years, adding 1.4 billion new subscribers between 2010 and 2015. But many economically developed regions, notably Europe and the developed markets of Asia Pacific (e.g. South Korea, Japan, Australia) have already reached extremely high levels of mobile penetration and are now at the point where future subscriber growth opportunities are limited. This means that the vast majority of the expected one billion new subscribers over the next five years will come from developing world markets.
The world’s two largest mobile markets, China and India, are forecast to account for 45 per cent of the subscriber increase over the next five years. However, by 2020, many large developing markets that have been the main engines of recent subscriber growth – notably China and Brazil – could also be approaching saturation point. Moreover, the subscriber growth opportunities that will exist over this period will largely involve connecting mainly rural, low-income populations, which may require collaboration between operators, governments and other ecosystem players to overcome the significant social and economic challenges in serving these communities.
However, the study notes that emerging opportunities in areas such as M2M will allow operators to continue to expand the connection base without having to rely on new subscriber acquisition. M2M connections are accounting for an increasing share of net additions in many developed markets. The development and rollout of 5G will further enable operators to play a growing role in the range of industries that are increasingly becoming part of the broader mobile ecosystem.
Measuring the True Reach of Mobile
GSMA Intelligence calculates unique mobile subscribers based on the number of active SIMs used by an individual, who can account for multiple mobile connections. Measuring unique subscribers is therefore a more meaningful representation of the true reach and impact of the mobile industry than connections. There were 7.3 billion mobile connections (excluding M2M) at the end of 2015, which means that the 4.7 billion subscribers reached by this point accounted for, on average, 1.46 connections (SIMs) each.
Levels of multiple SIM ownership have declined slightly in recent years, and will continue to decline, after increasing steadily in the earlier stages of mobile growth. This trend can be attributed to several factors: rising smartphone penetration and mobile internet adoption has fuelled usage of online communications services, which has negated the need for consumers to hold multiple SIMs in order to take advantage of price differentials between rival operator-provided services; improving network coverage means subscribers are less likely to require a different SIM to ensure connectivity when moving within a country; many markets now have policies to disconnect SIMs that are deemed inactive; and ‘late adopters’ to mobile are typically unlikely to be heavy users and therefore less likely to use multiple SIMs.
The GSMA’s latest unique mobile subscriber statistics are based on the results of an extensive global consumer survey conducted by GSMA Intelligence in 2015. During this process, more than 50,000 representative individuals in more than 50 countries worldwide were surveyed on their mobile usage patterns. Non-surveyed markets were benchmarked against a number of comparable markets.
A new GSMA Intelligence report published today, ‘Moving beyond subscriber growth: Emerging opportunities as mobile adoption approaches saturation’, highlights detailed global subscriber trends and growth forecasts across the world. This report is available to subscribers to the GSMA Intelligence service and to accredited members of the press on request.