Photokina 2014 the by yearly photgraphy and image event in Cologne, germany:

Position as the world’s leading innovation and business platform for the imaging sector emphatically underscored – once again some 185,000 visitors from around the globe flocked to photokina in Cologne – exhibitors praise strong international presence 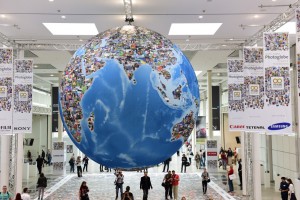 The 33rd photokina, which ended on Sunday (21 September 2014), was a great success. Some 185,000 visitors from more than 160 countries experienced a trade fair that presented a rarely seen image of youthfulness and freshness. Action cams and livestyle cams, wearables, multicopters and professional film equipment supplemented the diverse array of the photographic and imaging industry offering and proved that photography and filming is very much on trend. The international (trade) public took full advantage of the opportunity to try out new offerings and exchange news and views with other photo enthusiasts. Exhibitors as well were highly gratified with the way the trade fair went and marked the highly international trade visitor component out for particular praise. They accounted for 47.7 per cent of visitors, 44.3 per cent of them from abroad. There was particularly strong growth in visitor numbers from the USA, Asia and South East Asia and from the Oceania region. Gerald Böse, President and Chief Executive Officer of Koelnmesse GmbH was suitably satisfied: “Cologne is ‘the place to be’ for the photographic and imaging industry. This is where the industry charts the future course of the business.”

The unanimous opinion on the stands was that photokina 2014 will exert a strong bellwether effect. Katharina C. Hamma, Chief Operating Officer of Koelnmesse GmbH, emphasised the trade fair’s importance as a trendsetter: “The industry is now benefitting from the fact that photokina has constantly embraced trend topics and developed product segments so that it constantly reflects the current market situation.” This is also evident from the number of companies making their début appearance at the fair. With around 180 first-time exhibitors, this is higher than ever. They included such well-known companies as Google, GoPro, RED Digital and Blackmagic but also young companies such as Lytro, Helipro or startup Panono.

For Christoph Thomas, President of the photographic industry association, the way the trade fair has turned out is confirmation of the industry’s appetite for innovation: “photokina 2014 has impressively illustrated that nowadays there is scarcely any walk of life in which visual information and communication does not play a significant role. All companies have demonstrated with new and fresh ideas, innovative products and fascinating technical developments that the photographic and imaging industry has its finger on the contemporary pulse and is in fine fettle for the future.”

photokina’s function as a trendsetter for the industry was also emphasised by the exhibiting companies. Dr. Rolf Hollander, Chief Executive Officer of Neumüller CEWE Color Stiftung (Foundation), voiced his delight at the trade fair: “It couldn’t have gone any better”! Because photokina incorporated the ‘mobile’ topic into the trade fair at an early stage, our messages and new offerings fell on fertile ground among visitors – both among trade visitors but also especially with the end consumer. That is photokina’s enduring hallmark. It sets trends and drives topics forward. For us, photokina always drives sales for the months ahead.”

The international audience’s high level of technical competence and receptiveness to new topics also put a contented smile on the new exhibitors’ faces. Simon Westland, Sales & Marketing Director at Blackmagic Design: “It’s our first time at photokina and we are pleased to have been part of the fair. photokina has enabled us to tap into new target groups and is a fantastic opportunity to showcase our new products.” Jim Geduldick, Marketing Manager of GoPro, took a similar view: “For us the fair was definitely worthwhile! The decision to present our products at photokina proved to be spot on. We managed to attract important new target groups and the public was enthusiastic about our presence. For GoPro, photokina is exactly the right platform with a strong external international impact.” The worldwide attention photokina attracts also prompted Canon to unveil its new marketing campaign to the public: “There was a reason why we chose photokina to launch our new, global marketing campaign. You won’t attract more international attention anywhere in the world”, said Rainer Führes, Managing Director of Canon Deutschland GmbH.

The decision-making competence of the trade visitors was also impressive. In fact, initial results of an independent survey show that around two-thirds of visitors (65 per cent) were either main procurement decision-makers or else had decision-making input. This was also gratifying news for Martin Bongard, Country Manager at Manfrotto Distribution Germany: “We are highly delighted with the way the trade fair has gone. Numerous competent trade visitors – in increasing numbers from North and South America as well and from Asia who had meetings with us and – even more importantly – who placed orders in abundance actually permit only one conclusion: photokina 2014 has been a resounding success for us.”

And the retail trade as well was enthusiastic about photokina: “photokina is simply indispensable for the photographic retail trade. It is the ideal ordering and information platform”, said Michael Gleich, Managing Director of Ringfoto GmbH & Co. Also, as a specialist dealer, he said, you can observe the end consumer and study his enthusiasm for certain products and services. Gleich again: “The who’s who of the industry is gathered together in one place, new trends are presented and there is up to the minute market information that adds real value for our retail trade partners in the Ringfoto Group – what could be better?”

The next photokina Köln – World of Imaging – will take place from Tuesday, 20 September to Sunday, 25 September 2016.

If you reprint this document, please send us a sample copy or link to the online article.