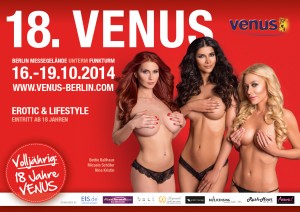 in the exhibition halls unterm Funkturm. The main stage will feature a non-stop run of

international stars with plenty of entertainment, and the other exhibition halls will also

offer a number of exciting attractions.

”The show must go on”

women with figures to die for, and who want to show all they have. Where else can

The stars will be going hands on at www.erotic-lounge.com. Those interested can get

hold of an attractive starter pack her, and apart from this they can also have their

photo taken with their favourite stars and collect a few autographs. The multiple

sex worker Lilien Cartride provides information about her job and fights for her rights.

Kaufmich.com has been in existence since 2010 and is active in Germany, Austria

sexuality and eroticism are the basic needs of people everywhere; which is why

Kaufmich.com wants complete recognition of this occupation. They fight against

discrimination and for the protection of prostitutes.